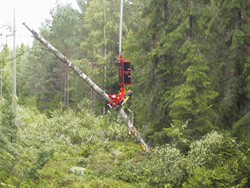 During 2004, we developed and began the production of Heligrip 220. Not even a year after launching the product it had its big breakthrough in Sweden in the aftermaths of “Gudrun” – one of the worst storms to hit Sweden in modern times. The Heligrip had such a dramatic effect during the clearing after the storm that it has become a standard tool in the battle against power outages.

Nowadays, the Heligrip is almost always used after rough weather – even in the absence of power outages. The operating inspection can be performed by the pilot himself and he removes any fallen or leaning (a.k.a “Dangerous”) trees which might threaten the power lines.

The Heligrip 220 has a patented design with dual hydraulic grapples and a guillotine which cuts the tree. All work, including the operating inspection, is done from the helicopter. This provides superior results as well as tremendous time savings in comparison with traditional ground based techniques.

Approval
All of our helicopter applications are approved by the Swedish Civil Aviation Authority and EASA. Heligrip 220 Certified 2004-11-26. 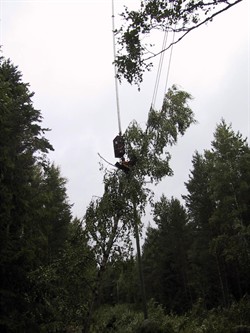